A new levelised cost of electricity analysis by Bloomberg new Energy Finance shows that onshore wind has become competitive with gas and coal in some parts of the world and that the gap between fossil-fuel production and solar photovoltaic (PV) facilities has also narrowed.

BNEF shows that the costs associated with onshore wind and solar PV plants have reduced when compared with the first half of the year, while the costs of gas-fired and coal-fired generation have increased. ” Our report shows wind and solar power continuing to get cheaper in 2015, helped by cheaper technology but also by lower finance costs. Meanwhile, coal and gas have got more expensive on the back of lower utilisation rates and, in Europe, higher carbon price assumptions following passage of the Market Stability Reserve reform.”

The report has been published at the same time as South Africa’s renewable- energy progress has come under the spotlight, with the Department of Energy releasing a ‘State of Renewable Energy in SA’ report that shows that the country will have 6 236 MW of renewable-energy generation by 2019. The study also shows that the prices of renewable energy have been falling over the past four years, with the average kilowatt-hour tariff dropping, 68% since 2011.

Levelised costs take account of the cost of generating a marginal MWh of electricity, as well as the upfront capital and development expense, the cost of equity and debt finance, as well as operating and maintenance fees. ” Generating costs continue to vary greatly from region, reflecting influences such as the shale gas boom in the US, changing utilisation rates in areas of high renewable’ s  penetration, the shortage of local gas production in East Asia, carbon prices in Europe, differing regulations on nuclear power across the world, nd contrasting resources for solar generation,” energy economics analyst Luke Mills outlines. In the UK and Germany, onshore wind is now cost-competitive with both gas-fired and coal-fired generation, once carbon costs are taken into account, the report shows.http://www.engineeringnews.co.za/article/new-global-study-highlights-rising-competitiveness-of-wind-solar-2015-10-06/rep id:3182 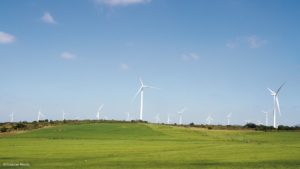