Move towards 100% renewable energy by 2015, says Greenpeace.” With real political will, we can get there.”

Greenpeace research in collaboration with the German Aerospace Centre, The Energy (R) evolution Scenario 2015, had shown that future savings in fuel costs would more than cover the $1-trillion a year investment needed to move towards 100% renewable energy by 2050.   Because renewables did not need fuel, savings over the same period were expected to amount to $1.07-trillion a year.   Naidoo advised Sairec delegates that carbon dioxide (CO2) emissions were deeply affecting climate change.   “We have to recognize that we are seriously running out of time, especially in the least developed countries in Africa and small islands…We are right on the edge.”

He said renewable energy was a way out and was poised to create jobs and opportunities.   The Greenpeace research had shown that more jobs would be created in the energy sector through renewables – with the solar industry alone forecast to employ as many people in future as the coal industry does today.

Within 15 years, renewables’ share of electricity could triple from the current 21% to 64%. Almost two-thirds of global electricity supply could come from renewable energy. Even with the rapid development of countries like Brazil, China and India, CO2 emissions could fall from the current 30 gigatonnes a year to 20 gigatonnes a year by 2030, noted the research report.    Further, the solar photovoltaic industry could employ 9.7-million people by 2030, more than ten times as many as it did at present, while jobs in wind power could grow to 7.8-million over the same period.

Naidoo, a South African, pointed out that the country needed a clear regulatory framework and incentives for the financial community.   “We need to turn every roof of every home, school and university into an energy generator but also an income generator. If we had feed-in tariffs, there would be an incentive to get returns. It’s within our grasp to do so. We need to move from rhetoric to change.” Print Send to Friend 2 1 He said governments needed to encourage banks to lend in a much more vigorous way to finance such renewable energy projects.   “Banks are waiting. They want that direction and it is important that we give it as soon as possible.”   He also called on governments to pass enabling legislation for the renewables industry to thrive.

It is our preference that if you wish to share this article with others you should please use the following link: 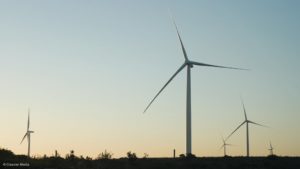